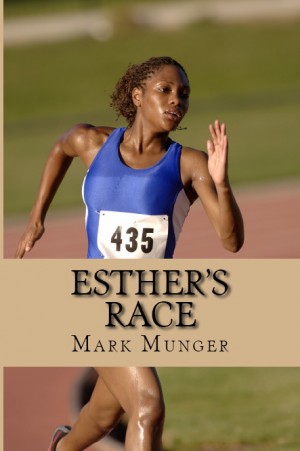 Also available as an eBook from Kindle, Nook, and Kobo!

Raised in privilege by her Caucasian mother and her African American father, Esther DuMont encounters tragedy at an early age. Steeled against this past, Esther makes her way through the world encountering prejudice and facing challenges to her morality, her sense of belonging and her faith.

Using language to paint the stunning scenery of Lake Superior’s Apostle Islands, the gritty urban landscape of the Twin Cities and the rolling farmland of Central Iowa, Munger has created a tightly drawn contemporary fable.

Mark Munger’s novel, Esther’s Race is compelling and engaging. The author has deep insight into his characters, to whom the reader can relate to at least one or more of them. Esther’s Race is very vivid, realistic, relevant, and thought provoking.  Henry L. Doyle (amazon.com  and barnesandnoble.com reviews)

Munger moves into new literary landscape with agility and grace. In Esther’s Race the threads of addiction, racism, relationships, grief, redemption, and hope are deftly woven together to create a story that fully engages the reader from start to finish.- Poet Deb Cooper

Esther’s Race is a compelling story that captures the heart of the minority experience in a fresh, real and understanding way. It is a literary triumph.- Pastor Derrick Thomas, AMEC

Esther’s Race speaks to the heart of human experience, transcending the boundaries of the racial divide. A must read.- Felicia Washington

A ripping good story. An unblinking look at racism in all its complexities. – Rev. Howard Anderson

If another Minnesota writer has attempted to approach the American archtype of the Tragic Mulatto, I am unaware of it…“A must read…” Minnesota Literature

Much of Esther’s Race is about self-discovery but it also tackles race, drug addiction, religion, recovery and love…The author uses classical African-American novels to help Esther learn more about her culture and history…(A)n appealing story told with a literary flare. RAWSISTAZ Reviewers