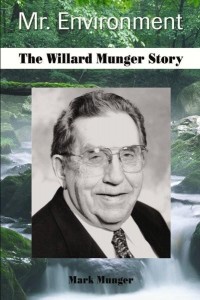 A compelling and candid biography of Minnesota’s most beloved state representative.

From Willard Munger’s impoverished birth in a northwestern Minnesota log cabin to his legendary train trip to the nation’s capitol to lobby FDR during the Great Depression to his ill-fated run for the Minnesota House of Representatives as a twenty-three-year-old Farmer-Laborite in 1934, the first section of this hauntingly detailed look at Munger’s life, “Pockerbrush Boy,” expands the reader’s understanding of the origins of the Liberal movement in Minnesota during the early twentieth century.

The second section of the book, “Entrepreneur,” chronicles Munger’s migration to the inland seaport of Duluth, Minnesota, his work as a union laborer in the factories and the shipyards of the Twin Ports, the beginnings of his business enterprises in the blue collar neighborhoods of West Duluth, and his involvement with the fledgling Democratic-Farmer-Labor Party of Minnesota as both organizer and candidate.

I found Mark Munger’s book “Mr. Environment” a detailed and poignant book that so clearly reveals the many facets of a great statesman – Willard Munger. The numerous stories based on countless interviews are moving and demonstrated what a passionate man Willard was on so many issues and the important role that his relationships with individuals played in his personal  and political life.  This is such a comprehensive biography that I marvel at Mark Munger’s  research and writing skills. Well done! Debby Dunbar Ortman

A story spanning the state’s 20th century political history, from the agrarian Nonpartisan League to the formation of the Democratic-Farmer-Labor Party, peppered with Minnesota’s most famous political names…(F)or anyone with an interest in Minnesota’s environment, history or politics.” Duluth News Tribune

The book fully sequences an epic career, and will tell you all you want to know about one of Minnesota’s greatest environmental heroes. Northern Wilds

The book tells (Rep. Munger’s) story from his birth in a log cabin in Otter Tail County…to his legendary journey to Washington, D.C. to lobby F.D.R. during the great depression and covers thoroughly his determined struggle to preserve Minnesota’s natural environment. Footprints

(A) primer on grassroots politics for any political aspirant…(and), for the rest of us, a story of “how to die with your boots on”…This anecdotal biography is written with humor and packed with personal stories that run the gamut of emotions. Budgeteer News.

This weekend, I picked up a copy of the new Munger biography, Mr. Environment…and was pleased to find on its’ pages the Munger I’d hoped to hear one last time. (A)uthor Mark Munger has done a stellar job detailing the life of a legislator who was a pioneer in turning state policy into a force for environmental protection.  Minneapolis Star Tribune

Mr. Environment…is worth every minute it takes to read its 530 pages…Mark’s book brings out the friction of a lot of fights that occurred over policy and legislation. Sometimes lapels got torn or noses got punched…Ah, the good old days! Mr. Environment chronicles all of Willard’s successes, his failures and shortcomings. It goes inside electoral politics and the legislative process…This is not a dull, historical read…You get Willard’s humor, his anger, his honesty, and just how crafty he was for a guy work worked hard to get his high school education…Reading Mr. Environment is reading the history of Minnesota. Mark Munger’s book is like sitting down with Willard and learning that history…I was going to pass my copy of the book on to someone, but when I was done, I realized I needed Willard on my shelf for reference. He taught us a lot and so has his nephew.  Labor World

This may be the first Minnesota biography of a state legislator, and those who follow political and environmental history will surely enjoy reading it. Conservation Minnesota

Mr. Environment: The Willard Munger Story is compelling and candid. Willard Munger went from impoverished childhood in northwestern Minnesota to Minnesota’s foremost environmental steward…Learn what made him “Mr. Environment” and how he changed our state. The Daily Journal (International Falls, MN)

In this candid, yet scrupulous, biography of his late uncle, Mark Munger chronicles Willard’s life…A multitude of letters and newspaper articles are sewn together by oral history contributed by Willard’s family and friends. The book will leave some readers feeling as though they missed out by not knowing Willard, or perhaps by not having the opportunity to vote for him. Mr. Environment is recommended reading for anyone with an interest in the environment or politics. Superior Outdoors

Just wanted you to know that I had finished your book on Willard Munger…I enjoyed it very much, particularly the old politics…I also learned a great deal about Willard’s stand on environmental issues, and it was important you documented that information and the history of how some of these laws came into effect. Congratulations!