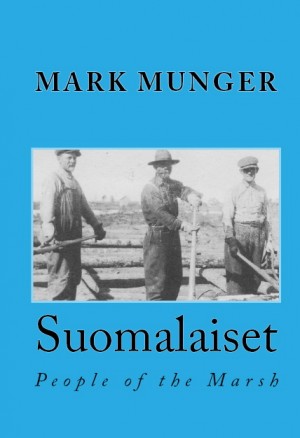 Also available as an eBook on Kindle, Nook, and Kobo!

A body hangs from a birch tree in Lester Park. There is no explanation for the man’s death, no suspects are detained. How is the death tied to the turbulent times, an era of labor unrest, political change, immigration, and the fighting of a war not of America’s choosing?

Sound contemporary? This wonderfully paced historical novel takes place across the hilly shoulders of Northern Minnesota and Upper Peninsula Michigan at the dawn of the 20th Century. A love story. A diary of the American labor movement. A tale of heroism and combat set in the Great War, Suomalaiset is, above all else, a thoroughly entertaining story of Finnish immigration and intrigue. For those readers that loved Mark’s first novel, The Legacy, this new work is a “must read”.

Weaving a rich tale of the turbulent time from 1910 to the 1920s, Munger blends a mix of people from laborers to well-off civic leaders to produce an engrossing picture of the people and period along Lake Superior. Lake Superior Magazine

(T)he finest portrayal of life in the Northland at the turn of the last century that I’ve ever read…What makes this book special is the research and the incredible wealth of background information.  Northland Reader

As winter settles over the region, those souls wishing to avoid the cold and snow should brew a warm beverage and settle in front of the fire with Suomalaiset: People of the Marsh…This ambitious historical novel sweeps the reader into a world of romance, labor strife, and political change with action bridging from Northeastern Minnesota to Canada and across the Atlantic to France…Munger captivates the reader by combining a strong fictional story with historical details. Ripsaw

This book brings to life the rich history that Duluth holds…The book holds an element of mystery, love, and truth. Soundings

Munger deals admirably with the constraints imposed by historical fact, but interweaves fact and fiction smoothly and believably…Munger uses his knowledge of human nature and the troubled teen years of the last century to provide the reader with an all too believable theory of historical events…It’s a tricky thing to bring real people into fiction but (Munger’s) speculation about events still clouded by mystery…rings true. Thunder Bay Chronicle-Journal

It’s difficult to put the novel down without contemplating how one is personally connected to early 20th century immigrant history, and further, what motivates today’s immigration…I strongly recommend Mark Munger’s Suomalaiset: People of the Marsh for casual reading as well as serious classroom study. The novel inspires us to examine not only our past but also the present-to envision new possibilities of what might have been and what could be. New World Finn

Mark Munger is not a Finn but his latest work, Suomalaiset: People of the Marsh, embodies a certain sensitivity toward his subject that I very much appreciate…I recommend the book as an excellent and entertaining work that provides a fictional peek into the forces coming to bear on the lives of Finnish immigrants in the upper Midwest. Finnish American Reporter

As we have been so much in Hirvensalmi in June and there is not much work that I can do, I have had time for reading…I finally read the book written by Judge Mark Munger (Suomalaiset: People of the Marsh) which is very interesting for me because it gave such a good idea of Duluth and Minnesota mining areas…Now I can better understand what life was like there and the difficulties that the Finnish immigrants may have had. Rea Holopainen, Helsinki, Finland

A message for Mark:

I just got done reading Suomalaiset…Loved the book!… Thanks Mark, for a great book! I will be buying another one. Lisa Berglund