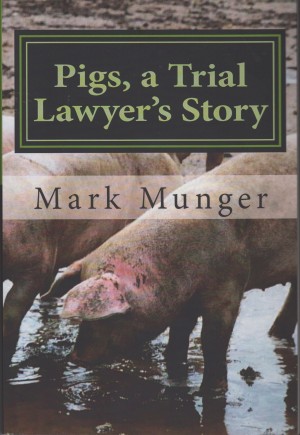 Also available as an eBook on Kindle, Nook, and Kobo.

Mark Munger’s second novel, Pigs, A Trial Lawyer’s Story was published in 2003 and has become another regional favorite. Compared by readers and reviewers to Turow and Grisham, this tale of love, the law, and choices made remains a frank and thoughtful look at life in a Minnesota small town amidst the chaos of marital discord and high-powered civil litigation.

Last night I finished Pigs…I enjoyed it VERY much. I would dare to describe it as BRILLIANT!…I found the book at your table at the Episcopal Diocesan convention a few months back. It now occupies a weighty space of honor in our family collection of books. My husband and I lived in Argyle ad Warren, MN from 1985-2002…(R)eading a story of lawyers and the legal process, set in area towns we knew so well, was great. I’ve read a lot of fiction over my lifetime, but your work was interesting and absorbing in a special way for me.

ALL the best in your writing and other work.

Mark Munger’s novel could not be described as reading material for those who want a book to put them to sleep at night. After I had read the first chapter, I was hooked, eager, and interested in reading further. It was difficult to tear myself away from reading the book, when something else demanded my attention and energy. At times, I chose to read the book, instead of doing an essential task. Munger’s characters came to life; they were quite real and genuinely portrayed. With several of them, I identified and empathized. With the main character, Danny Aitkins, I had to refrain from having a “holier than thou” attitude. Some things said and done in the book provoked thought and introspection. The last page has been turned, but Pigs, A Trial Lawyer’s Story has not gone away. Henry L. Doyle (5.0 out of 5 stars:  Not for Sleep! January 12, 2010 amazon.com review)

I always look forward to a new book by Mark Munger, and that’s partly because he’s so willing to experiment with new genres, but partly too because he brings an unusual set of life experiences to his work as a writer. Munger is a judge now in Duluth, but he reminds us in this novel that judges used to be lawyers, and here’s a story about a trial lawyer…(The story) gives rise to the philosophical question: Is it easier to be a good person if you’ve never been tempted to stray from the paths of righteousness?…It’s great, it’s intriguing, it’s well worth reading. Thunder Bay Chronicle-Journal

Judge Munger’s new novel is something to squeal about.. Pigs has a definite Minnesota aroma to it. The novel is replete with local references that make reading regional writers such fun. Among the places and things mentioned in this novel are: White Earth Reservation, youth hockey, Highway 10 West of Moorhead, Lawyers Concerned for Lawyers, the Canadian band the Cowboy Junkies-and more. A barnyard of litigation. Minnesota Lawyer

Munger offers us a behind-the-scenes look at the legal system, and he shows us how events and people, often far removed from the scene of action, can be manipulated by the rich and the powerful. Though the litigation process is the focus of the story, the heart of the tale lies in Danny Aitkins’ personal struggles with his family, the widow of his best friend, and ultimately with himself. Pigs is a cinematic novel that would translate well into film. Bill Durbin

Munger’s protagonist, Danny Aitkins, a third-generation lawyer, grapples with both professional struggles and a troubled relationship with his aspiring wife. This reviewer, a family therapist, was particularly taken with the author’s sensitivity concerning the internal dialogues of both the male and female characters involved in the infidelity subplot. Mark Munger…is becoming a regional writer to be sought out for both an adventurous and a thoughtful read. I found the book memorable. Soundings

Pigs was a fascinating book – so detailed. It requires re-reading to absorb everything. Mary Lee Vance