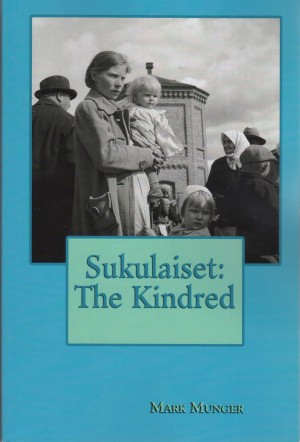 Sukulaiset: The Kindred by Mark Munger

Description: The long awaited sequel to Suomalaiset: People of the Marsh, Mark’s epic novel of Finnish immigration to the United States and Canada, Sukulaiset portrays the journey of Elin Gustafson from the shores of Lake Superior to the shores of Lake Onega in the Soviet Republic of Karelia during the Great Depression. The story unfolds during Stalin’s reign of terror and depicts the interwoven lives of Elin, her daughter Alexis, an American logger, and two Estonians wrapped up in the brutal conflict between Nazi Germany and Soviet Russia. A page turning historical novel of epic proportions.

“Munger’s latest Finnish novel is a triumph: The amount of research that went into Sukulaiset…is mind boggling. In the hands of a less talented writer, the book might come across as a well-intentioned but dry history lesson. It put Karelia and Estonia on the map for this reader. Munger has a gift for couching historical events in every day details and for writing natural sounding, engaging dialog. Many of the characters are based on real people but he fleshes out even his completely fictional characters with a fine brush…The short paragraphs and chapters make the details easy to digest. This is the kind of book that is so historically rich and enlightening that you wish you could talk about it with others. It’s a great selection for a book club or a history class. How a busy district court judge like Mark Munger finds the time to write tomes like Sukulaiset and Suomalaiset and at least six other books to date is a mystery. But it’s a good thing for Duluth, Finnish people, and lovers of history.” Maureen Maloney, Budgeteer News (8/24/2014).

“As he did in Suomalaiset, Munger not only provides illuminating historical background, he also brings us into the minds and hearts of the central characters. And that cast of characters is compelling, to say the least…(W)e also get page turning tension as the book’s protagonists endure incredible hardship or tangle with inner demons or fall in (or out of) love or discover their own surprising strengths and weaknesses…Munger, who is not of Finnish ancestry, does a masterful job of capturing the essence of the Finnish character. It is also quite clear that he invested prodigious research into Finnish and Estonian history…

A preeminent contemporary writer, E.L. Doctorow, might just as well have been describing Munger’s latest book when he said, ‘The historian can tell you what happened. The novelist will tell you what it felt like.'” Davis Helberg, New World Finn (Oct/Nov. 2014)

“Sukulaiset by Mark Munger is a complex story of unexpected relationships, connections, and choices. The ending is both surprising and revealing about the way the story unfolded. I cannot think of another book I have read that ended in a way that was a first perplexing and then gave me an ‘Aha’ moment of sheer pleasure…There is nothing derivative about the characters in this story of survival. Each one needed to be resilient, adaptable, and capable of living with the choices they made as they confronted the constant dangers of living in irrational totalitarian states…Quite simply, this is a marvelous story. It is one of those rare books that are hard to put down. Even if you do not go back to the book for a few days, you have no trouble remembering exactly what happened in the story when you finally pick up the book again.” Pam Brunfelt, Finnish American Reporter (February 2015).

“In beautiful winter Finnish forests and on the centuries-old streets of Estonian towns the magnificent story of love and rivalry, war and peace, separation and reunion unfolds. The characters are often based on real people, and that is why a reader follows their lives with a heart trembling and with full immersion into their dramas and tragedies. This rich, detailed and easy-to-read historical fiction is a perfect book both for those who are interested in the history of Finland, Estonia, and the Finnish-American migrant diaspora from the 1930s to the 1940s, and for those who are curious to learn something about this history. Although Mark Munger is neither a Finn nor Estonian himself, he writes about Finland and Estonia with both skill, knowledge and understanding. The novel is not only a story of the Finnish and Estonian characters’ battles and hardships, but also of their feelings, strengths and weaknesses which they discover and rediscover during the hard times. An inspiring book…  “ Roman Kushnir, Migration Turku, FI. (1/2015).

7 Responses to Sukulaiset: The Kindred