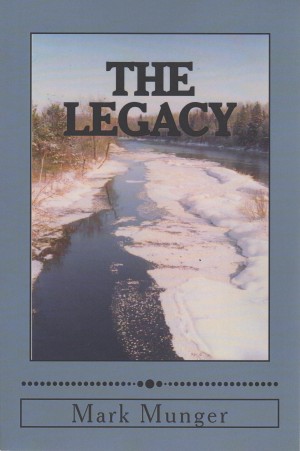 Also  as an eBook on Kindle, Nook, and Kobo!

A unique blend of historical fiction and romance, Ghosts, the first book of this novel takes place in WWII Yugoslavia and follows the struggles and triumphs of young Eli Kobe, a communist Partisan freedom fighter seeking revenge on the Nazi forces of occupation. Set against the brutality of war and genocide, Kobe’s story becomes interwoven with that of Marta Essen, the wife of a German SS officer, making their lives inseparable.

In The Hunter, the pace of the novel quickens. Two old men are found dead in the wilds of Northeast Minnesota. Sheriff’s Deputies Debra Slater and Dave Swanson race to save a third victim from an assassin’s judgment. A judgment rooted in an atrocity fifty years in the past.

Electric, edge-of-the-chair fiction that will keep you turning each page. Barry Reed, author of The Verdict and other novels

Part historical novel, part contemporary thriller, The Legacy is a very impressive first novel. Vincent Bugliosi, author of Helter Skelter, And the Sea Will Tell, and other best selling books

I  was enthralled by Judge Munger’s portrayal of the sad, complicated history of the former Yugoslavia. His use of intricate prose will keep readers engaged from beginning to end. Former Vice President of the United States and Former US Ambassador to Japan, Walter Mondale

This marvelous first novel is a sure winner. Mystery Review Quarterly (Summer 2002), which rated the novel 3 and ½ “daggers” out of 4

Guaranteed to keep you turning each and every page. UMD Statesman

It has all the page-turning power of a mystery but with…complex characters, historical intrigue, and a literary style that digs below the surface… This release in Munger’s first and it’s a dandy. Budgeteer News

This tour de force first novel weaves a story of strife…(A)s compelling a novel as we’ve seen in a while. Lake Superior Magazine

The Legacy is an exciting tale of intrigue, revenge, and constant surprises.Thunder Bay Chronicle-Journal

Munger is a master of description…The Legacy satisfies both the senses and the intellect. Fargo Forum

My wife bought a copy of The Legacy at the last Diocesan (Episcopal) convention, and gave it to me for Christmas. It is a long time since I have enjoyed a book so much. I had to ration myself to about three chapters a day. Your descriptions take much less than a thousand words to evoke a picture, be it of the Balkans or the north woods. Your characters came alive and for awhile, became people I felt I knew. Thanks! (I’m now into Suomalaiset and enjoying that too.)

Dr. Grant received his Ph.D from the California Institute of Technology and is a retired professor of geology from the University of Minnesota system. You can learn more about his career and his publications at: http://www.d.umn.edu/geology/people/fsbios/grant.html. Thanks, Dr. Grant: Reviews like yours are the reason I keep spinning yarns!