A Treat of an Interview 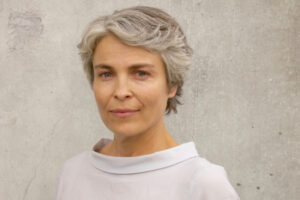 MM: Let’s start with your new streaming series. What can you tell readers of FAR about the ideas/themes behind Peacemaker and the character you play, Ann-Mari?

IB: Peacemaker is the most important role I’ve had far. There are different kinds of entertainment – the kind that you make for the simple reason of pleasing the audiences (comedies, horrors etc), and the kind that have a deeper goal – to generate discussion. Peacemaker is a peek into the world of peace negotiators – people who deal with crises, wars, mass graves – and try to help those affected find a peaceful solution to their problems. I play Ann-Mari Sundell, Finland’s former minister of foreign affairs, sent on a mission by the UN to help negotiate peace between Turkey and the Kurds – not an easy goal to attain.

MM: Our mutual friend, Gerry Henkel, gave me a heads’ up about Peacemaker. As a fan of Ambush and other films you’ve done, I’m glad I got a chance to watch Ann-Mari’s character unfold. Talk about the transition from being a young actor playing the romantic lead in Ambush to playing Ann-Marie a mature, confident, intelligent diplomat charged with a daunting task?

IB:  It’s funny you would mention my role in Ambush as a romantic lead since it’s a war epic. At the time (in 1998) it was my most important role to that point – as it brought the details of the Continuation War to younger filmgoers. Over 20 years have passed since Ambush; I’ve made some good and some not-so-good choices along the way.  My main objective as an artist stays the same – to concentrate on works that have a message somewhere, and to contribute to making this world a better place.

MM: Fill FAR readers in about the settings used and the cast of Peacemaker.

IB: We filmed most of the series in Gran Canaria because of the versatile landscapes the island offers. Some shorter episodes were shot in southern Spain. Ann-Mari’s home is set in the western Finnish archipelago, in Nauvo – beautiful! Other main characters include Richard Sammel (Inglorious Bastards), Louise Peterhoff (The Bridge), Mikko Nousiainen, and Kardo Razzazi.

MM: I just watched Kate Winslett on CBS Sunday Morning talk about her struggle to secure meaningful roles as she ages. She’s but one of many female actors who’ve pushed back against the lack of roles available for women of a certain age by finding their own projects to produce, by adding director to their resume, and the like. How has it been for you, both in Europe or elsewhere, in finding roles that are appropriate for your craft and talent? Have you directed?

IB: Personally, I’ve had to wait to be nearly 50 in order to start getting truly interesting proposals. Sure, there may still be more out there for younger women to play, but as in everything in life, it’s not the quantity; it’s the quality. I did feel it was important to portray a middle-aged woman who’s not afraid of showing her age. Ann-Mari carries her gray hair with pride and doesn’t use make up; her person is enough. I’ve never directed, and I don’t think I will. Acting is not my only aspiration in life. When I’m not acting, I’m working on music projects. A balance between all of those things, along with finding happiness in enjoying my family, my home, and the nature I’m surrounded by… is what I’m looking for in life.

MM: How has the public reaction to Peacemaker been? What will it take, do you think, to make the fiction of Peacemaker into reality?

IB: The message that Peacemaker sends is that an outsider alone can’t fix things. Ann-Mari is just a facilitator. As Finland’s former President Martti Ahtisaari said in his brilliant 2008 Nobel acceptance speech – “Peace is a question of will”; the parties have to find the will to come to peace. I’m just an actor. I really shouldn’t be asked about these things! But to be serious, Peacemaker has gotten a great response from people who work in the field and from audiences, too. It’s been nominated for five Golden Venlas in Finland. I couldn’t be happier.

MM: I found Peacemaker on the streaming service Topic. Are there other ways for FAR readers to connect with the series? Will there be a season two?

IB: Topic or Amazon Prime are the ways to go. I’m hopeful for a second season, but I can’t promise anything yet. If it were up to me, I’d gladly make playing Ann-Mari my personal retirement plan!

IB: Barely Ann-Mari is unique in that it’s written from the point of view of the character I play in Peacemaker. It reflects her inner thoughts, dreams, hopes and fears; feelings she’s not allowed to show in the series. I started writing lyrics as I prepared for the role in order to get to know the character and realized I had material for an album. The collaboration with Pauanne came about naturally, as the members of the group have been members of my own band for years. We found a new sound for this album by letting Finnish folk music portray Ann-Mari’s Finnish roots and English lyrics highlight her international expertise. As an artist, I like to explore new styles but I recognize my limits: I wouldn’t attempt hard rock or opera!

MM: Where can FAR readers find the album?

IB: It’s distributed by Nordic Notes and available digitally worldwide through the link below. You can also find it on iTunes, Amazon, and other listening platforms. Amazon also carries the physical CD.

MM: Hopefully, someday the limitations imposed by COVID-19 will be lifted and you can perform the music from the album live.

IB: I happened to get lucky. I booked the release tour for the album (in Finland) last October. Despite the pandemic, only one show was cancelled. The venues were mostly sold out within the limits allowed. It was a touching experience – as we knew that the people who came to hear us thought it worth the risk of possible contamination to attend.

MM: You’ve recorded music, I believe, in Finnish, Swedish, French and, in Barely Ann-Mari, English. Talk a bit about the flexibility of language and how that assists in your art and your world-view.

IB: I grew up traveling with my family and living in Sweden, Finland, and France. I later spent fourteen years in California before moving back to France. I had to learn Turkish for Peacemaker. That was incredibly hard. But knowing other languages helped understand the logic behind Turkish. I enjoy playing with accents in my work. For Ann-Mari, I use the typical English accent of a Swedish speaking Finn – rather than the one of a Finnish speaking Finn. These details make a difference in the character.

MM: What’s in the immediate future for Irina?

IB: After three years spent in the world of peacemaking, I couldn’t be happier taking time off. At home in France I’m concentrating on my personal peace, which includes growing vegetables, caring for farm animals, and homeschooling our son. Ideas are brewing. I recently read David Attenborough’s A Life On Our Planet, which was life-changing. It’s a must-read for all of us. Another lovely and thought-provoking French novel I always recommend to readers of all ages is Jean Giono’s The Man Who Planted Trees. We all can make a difference for the future of the planet and humanity if we act now. Following the novel’s theme, I’m going to plant one hundred and sixty acorns next week. I dare you and the readers of FAR to do the same!

Peace is a Question of Will music video by Irina Björklund & Pauanne featuring President Martti Ahtisaari:

I'm a reformed lawyer and author.
View all posts by Mark →
This entry was posted in Blog Archive. Bookmark the permalink.