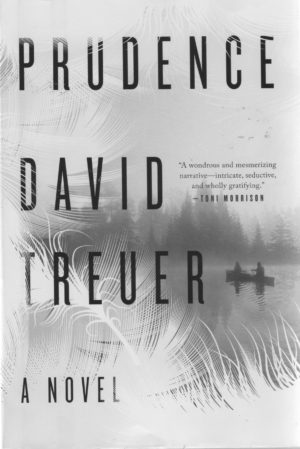 Another bargain bin hardcover I couldn’t pass up at Fitger’s. When I see the name “Treuer”, I think of brothers Anton and David, Ojibwe from the Bemidji area of Minnesota. So when I saw this book and saw that it was written by one of the brothers, I had to have it. Had to. Thing is, I can never keep the guys straight. Anton is the brother who spoke recently at a judge’s conference I was at on the topic of race. His work in words tends to be more historic and academic. David is the novelist. Their parents have interesting life stories of their own but don’t really fit into this short review. Anyway, I knew the name and I’d previously read Rez Life so buy the book I did!

The language and style and pace of Treuer’s writing mimics the speech pattern of many Ojibwe people I’ve encountered in my career as a lawyer and judge. There’s a clipped, sing-song rhythm to the language the author uses, not only in dialogue but also in the narrative sections, that reminds me of those folks. And that’s a good thing. A very good thing. It gives the novel authenticity of the sort a white author, writing about or as a Native person, would be hard pressed to duplicate.

Prudence is the title of the book but she is, in many ways, the backstory here. The real focus of the plot and the novel is the love story and relationship between Frankie and Billy, two young men trying to find themselves in the aftermath of a tragedy that took the life of Prudence’s younger sister. There’s a sexual tension between the two boys, who become men during WW II, that is remarkably tender yet painful:

As he said it, he reached up and picked a twig from Billy’s hair and leaned in, his eyes closed in expectation. Billy closed his eyes and let himself be kissed. How long had it been? A Year? A full cycle of seasons and chores and school and all that work peeling pulp, and the letters, and the books, and his own pitiful letters back, smudged and probably misspelled. Billy kissed him back and savored the slight, ever so slight feel of Frank’s stubble on his lips. His blood rushed in his ears.

Part literary novel, part mystery, but always spot on in its depiction of tragedy-both individually and culturally-I raced through this book one recent sunny weekend, lounging on my porch swing, following the lives of Frankie, and Billy, and Prudence, and the silent, near stereotypical Ojibwe warrior, Felix, who knows all but says little. It was a great, great ride with one exception.

Inserted into the plot is a short yet, in my view, disruptive scene involving a German immigrant to the town where the tragedy and murder take place. A wandering Jew (OK, I admit to doing that on purpose!) comes into the picture, having only been mentioned briefly in the prologue. There’s confrontation and perhaps, revelation, that really doesn’t have much to do with anything. If Treuer was attempting to use the Jew’s sudden appearance to jolt the reader, his ploy worked. But in my humble view, there were likely better ways to keep the tension high and the suspense taut then plucking down a Holocaust survivor in the middle of a tale centering around Ojibwe culture and history and dislocation. But for this editorial decision, one that I am sure the author and his agent and the publisher haggled over before it’s inclusion, this would be one of my favorite books of the summer.

Still, I enjoyed the writing and the characters to the point where I’d recommend Prudence as an excellent book for summer or winter reading.

4 stars out of 4. Would have been 5 but for that darn, wandering Jew…

I'm a reformed lawyer and author.
View all posts by Mark →
This entry was posted in Books. Bookmark the permalink.